Free Ground Shipping Over $49
Free Ground Shipping Over $49
How thoughtful of you! Now send a short message that will ship with your gift. The recipient will know it's from you, but they won't see any pricing.
Continue Shopping
[[ formatted_image ]]
[[ product_title ]] ##OPTIONS##
[[ variant_title ]]
##OPTIONS##
[[ formatted_price ]]
Delivery
Remove
##DISCOUNT_DESCRIPTION##
[[ discount_description ]]
##DISCOUNT_DESCRIPTION##

This modal can be opened by clicking the anchor icon in the pre-header. Because the link uses an href anchor (instead of data-open-modal) you'll see #example_modal in your address bar. If you want to see the hidden modal, manually change the url in your address bar to #hidden_modal.

This modal can be opened by clicking the window icon in the pre-header. Because the link uses data-open-modal (instead of an href anchor) nothing appears in the address bar. You also can't use the back/forward buttons to close or reopen the modal. However, if you know the ID of the modal, you can still manually type the anchor link in your address bar and it will open (handy for client previews).

To simulate an extremely long modal and show how modals scroll, here's a ton of lorem ipsum:

This modal has no link to it. The only way you can find or open it is by manually entering #hidden_modal in the address bar.

Yes, take me there!
No, I'll stay here

you heard it first

you heard it first - tag

When folks first started diving into replacing eggs in recipes, the common fallback method was a powdered replacer that worked as a “one-size-fits-all” fix. This commercial mixture – a combination of leavener and starch – did double duty, adding some binding power and lift to eggless recipes so they’d taste more akin to their eggy counterparts.

But now that bakers take the time to explore other options and seek creative alternatives, the need to replace eggs with something from a box is no longer a must do. Cakes, cookies, breads, brownies, puddings, ice creams... anything goes! Not only are they possible without eggs, but without an extra ingredient in our pantry, too.

The next stop in our Baking Science series is looking at these egg replacers and when and why they work best. I’ve done a lot of exploration on this topic, both in my books and ongoing book talks, taking inspiration from readers’ and participants’ questions when they try to uncover making simple, uncomplicated allergy-friendly treats. This post will cover some of the most common egg replacing methods, but I’ll tell you that while it doesn’t end here, this is where it certainly starts, giving you the basic tools in your armory to explore some baking science with success.

But before we get to the six must-know options, you first must-know this: every time you see an egg in a recipe it has a role. It might provide structure, deliver rise and lift, work as an emulsifier, create tenderness, increase shelf life, or add moisture and color. You need to know their function to replace them before you take another step or stir. 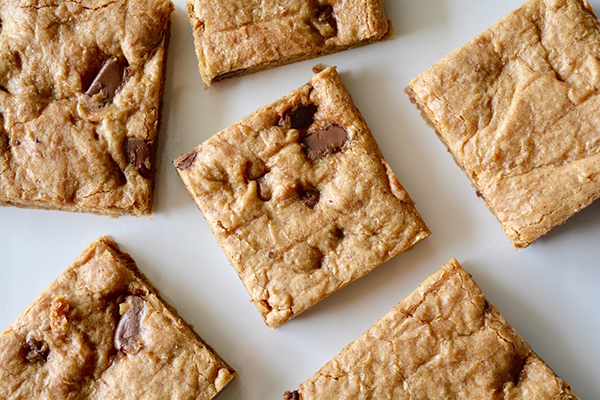 Take these blondies (below) for example. The blondies use a flax meal method, which adds moisture, increases shelf life, but also adds density. The density and moisture are pertinent to blondies (and brownies), so it works well in this context without needing the airiness or flavor that eggs might be there to deliver. The general rule of thumb for 1 egg is 1 tablespoon ground flaxseeds mixed with 3 tablespoons warm water.

If you used commercial powdered egg replacer instead, you’ll get a cakier result – that’s because the powder is designed to add a little bit of lift (like baking powder), in addition to binding power. If you like this cakey-ness, this might be the best choice for you, but here’s a hint: you can easily make your own version that works just as well using 1/4 teaspoon baking powder and 1 tablespoon tapioca flour.

Another option might be aquafaba, the liquid from canned chickpeas. This is like using an egg white, and the end results would be akin to flaxmeal, minus the increase in shelf life, since it’s a little less moist in the long-term. For 1 egg, you’ll need 3 tablespoons aquafaba.

Chia seeds can also work similarly to the flax, and work well in blondies and brownies because they are already on the dense side. But, be wary of using chia seeds without abandon – too much, in things like breads or cakes – can result in gooeyness and an under-baked texture.

I always call cider vinegar the magic ingredient for allergy-friendly baking. It adds texture, shelf-life, and lift – much of what an egg does, but also assists when treats are dairy and gluten-free, too. Use 1 tablespoon vinegar per egg to deliver a little more oomph, especially when the recipe is vying for a lighter texture (like in cakes or bread).

Sometimes, though, a bit of extra moisture is all you need. When that’s the egg’s role, dairy-free milk works just fine – especially when it has a bit of fat. Alternatively, you can use mashed fruits or vegetables, like applesauce, banana, or pumpkin. These also add moisture, as well as a bit of binding power, density, shelf-life, and taste – all of which goes well with a blank slate blondie.

Use these tips to adapt my Decadent Blondie recipe below. I’ve included a variation that uses mashed fruit (in this case, banana) instead of the original flax method. You’ll notice there’s still flax in the variation – that’s just for some fibre and nutrition – and other than a few twists to the original’s liquid ingredients, the dry ingredients stay the same (save for some spice). 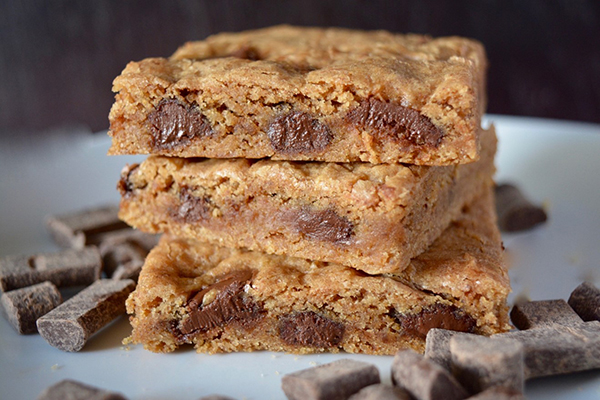 This recipe is forgiving, so if you experiment, just remember these tips (then go let your culinary curiosity take hold!): 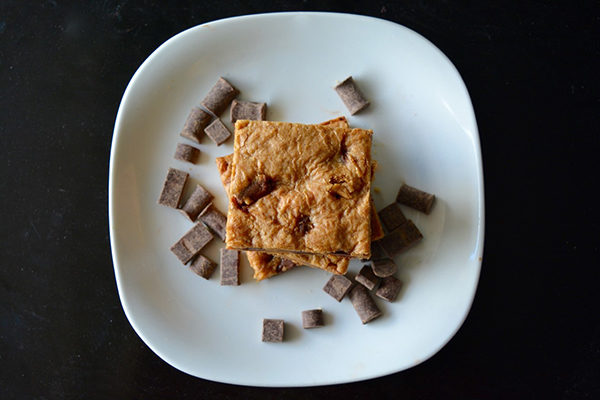 Makes 12 to 16 blondies, depending on size

Laurie Sadowski is the author of three cookbooks devoted to gluten-free, vegan, and allergy-friendly baking. Using baking chemistry as a basis, everything is developed—and guaranteed—to taste ‘just like the real thing’. For more, visit lauriesadowski.com.

You heard it first

You heard it first | Blog

Get the Enjoy Life email newsletter and become a part of our community! Stay informed with new product launches, store announcements, tasty recipes and more.